I’m attending The Northwest Regional Meeting of the American Chemical Society in Corvallis. I just wandered around downtown. That was nice. My hope is to see some computational chemistry, commercialization, and nanoparticles tomorrow.

What tools are getting used for simulations? I’m especially interested in coarse-grained simulations of macromolecules. I see several Density Functional Theory talks and that should be interesting. Maybe folks from that world can point me in the right direction. Is anyone using tensorflow for such things?

There’s a panel on market-driven innovations. I would love to hear if people are funding academic labs through collaborations with industry. I feel like that would be a win-win, but I don’t know where to start there, either.

If you’re in Corvallis and are reading this, do please shoot me a gmail (pballen). I’ll buy the first round at Tommy’s.

Iron is cheap, and iron chemistry can be used to make a battery. If you want to buy a lithium-ion backup battery pack for a home solar system, it will cost as much as the solar panels. Effectively, a 24/7 solar system is about double the cost of a grid-tied system. The same is true for the grid itself. If the utilities want to move to cheap solar power, they will need to buy huge batteries. If utility companies tried this with lithium batteries, it would be such a big endeavor that it would mess with the lithium market. Iron is produced at such a huge scale that a move to grid-scale iron batteries wouldn’t completely alter the iron market.

I tried a dumb idea and it didn’t work. I tried to make an iron-oxide electrode for an iron battery. The idea was that iron oxide can be reduced to iron magnetite. That would be a cheap cathode for an all-iron battery. Plus, since iron oxide is a solid, it would stay where it was put and not diffuse over to the other electrode. So that would be nice, too.

Obviously (even to me at the time) iron oxide is an insulator, not a conductor. So if it is going to act as an oxidizing agent, it will need a path for electrons. Electrons can’t move through the iron oxide. They need to move through some other conductive material. So I embedded iron oxide particles in graphite. 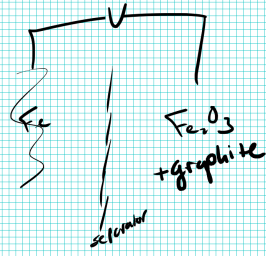 The result was nothing at all. The cell was dead on assembly. I could not detect the iron oxide reduction/oxidation with any instruments at my disposal. Other groups have reported the oxidation potential of the iron oxide nanoparticles. They put them in a suspension swirling near the electrode and that seemed to work. So maybe it’s possible, but I can’t get it to go. Iron oxide is out.

I made a better cell with Iron (III) EDTA as the oxidizing agent. It’s soluble so that makes things work better. I used a graphite felt as a current collector and it worked just great. The energy density is low (as expected) but it works. 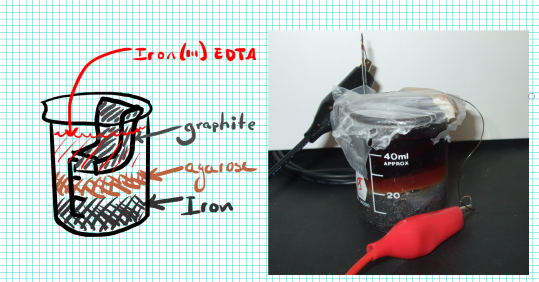 The next step is to optimize and stack up a bunch of cells. I think it’s getting close to being an “open source battery.”

I’ve been vlogging about this, if you want to watch progress in almost real time, have a look.