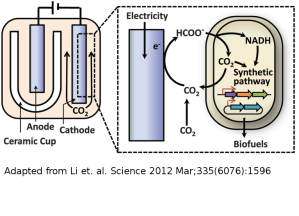 There are now two ways to combine CO2­ from the air with electricity to make liquid fuels. Li et. al.1 from UCLA published a paper in Science showing that they can use bacteria (not platinum) to convert electrically generated formic acid to fuels.

Before, using high temperatures and platinum catalysts, carbon dioxide and hydrogen could be made to form methanol2. Methanol can then be formed into gasoline, diesel, etc.3 The numbers seem to indicate that with current, off the shelf technology, 5¢ per kilowatt-hour electricity can be converted into $5 per gallon gasoline. With a little improvement (or a little higher gasoline prices) that is cost-competitive. There is a Los Alamos project called Green Freedom that aims to do just that.4 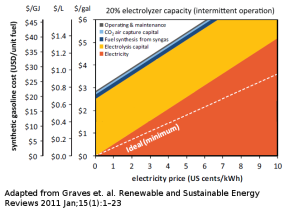 I think this new microbial technology is the key to getting the cost down.  The bacteria eat formic acid. Formic acid can be made very directly from electrically generated hydrogen and carbon dioxide. It looks like this group has skipped the hydrogen step and reduces it directly.  This is good because doesn’t require a super-pure stream of CO2 like Green Freedom’s more conventional chemical technology. Purifying and concentrating CO2 from the air (or, more stupidly, from the smokestacks of existing coal plants) is one of the most expensive parts of the existing technology. So it stands to reason that this biochemical process could be a lot cheaper. If it is also scalable, then that could seriously improve the economics of making fuels from electricity.

Here’s another example. Let’s just guess that this microbial technology allows for the use of small electrolyzer at 100% capacity instead of a big electrolyzer at 20%. That brings the price to more like $3 per gallon at current electrical rates. Sounds OK, doesn’t it?