I’ve been interested in earth abundant battery materials since I saw Sadoway’s TED talk. The idea is to start with the earth abundance of elements and choose something from the top. 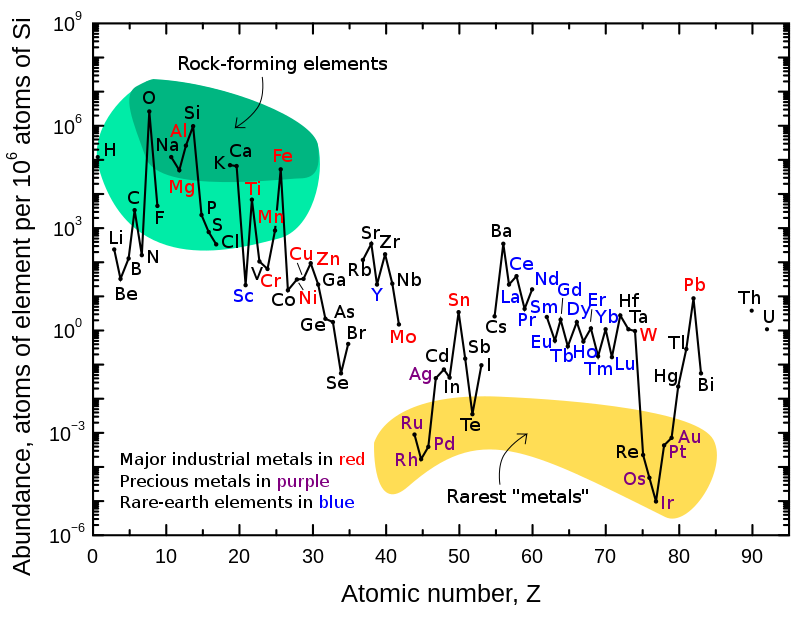 In this graph (credit wikimedia), the elements in the upper left are the ones we want to focus on. These are elements that are easy to find. They are cheap as rocks. Because rocks are made of them. That’s what we want to make our battery out of.

These batteries will not be high performance. Think tractor not Tesla. When it comes to performance, lithium is great. It gives a lot of energy per unit mass (because it is light and reactive). Lithium is about 800 times less abundant than sodium. Sodium is heavier and less reactive so the performance is lower. Maybe sodium is ten times less useful as a battery. But if it’s 800 times cheaper, it still wins for applications where price is the bigger issue.

There’s a nice article about a new sodium metal battery technology in ACS Central Science. The article talks about making a better battery by suppressing dendrite formation. The battery has a sodium metal anode, a CPMEA polymer barrier to prevent dendrite formation, an ion-conductive NASICON ceramic separator, then a titanium phosphate/CPMEA polymer cathode that can absorb the sodium ions.

I had not read up on the NASICON ceramic sodium conductor before. It’s an interesting material in its own right. It has been studied since the 60s and is not too hard to prepare. I’m not sure I understand the need to add the ceramic membrane, though, since the CPMEA polymer may conduct sodium already? I would like to try making a suspension of NASICON powder in pre-polymer and then polymerizing it. I wonder if that would make a decent membrane. It might be easier to manufacture than a sintered disc? Maybe I’ll see if I can work with an inorganic chemist to try it.

If someone out there has some Na1+xZr2SixP3-xO12 they would like to share, I’ll make you a polymer membrane with it!

In Allen lab News, I was able to make some particles with my microfluidic droplet generator. Now, today, I’ll see if I can make them homogeneous.

If you want to hear me yak about all of this, you can catch me on the youtube: